Pulitzer Project: A Summons to Memphis 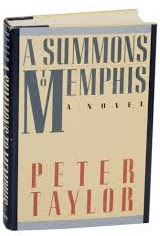 The Pulitzer Project continues to lurch from one extreme to the other, from work that is so horrible to read you wonder about the sanity of the judges to prose that sings, from books fat enough to double as doorsteps or ballast in a freighter to books so thin they barely qualify as books and not pamphlets. 1986 had Lonesome Dove, a tome so thick and heavy it was physically hard to read in bed. 1987 has A Summons To Memphis, a piece of lightweight fluff that feels so thin you kind of expect it to just float away.

A Summons to Memphis seems to fall into a familiar category among the Pulitzers, the equivalent of a lifetime achievement award. Author Peter Taylor was an acclaimed author with numerous short stories to his credit. According to the cover blurb, however, A Summons to Memphis was his first novel in 35 years.

I must say the book is readable. Taylor could write. The prose flows. You keep reading despite the fact the narrative feels a lot like a Seinfeld episode -- a story about nothing -- and then you realize it's actually a subtle paean to the joys of being passive aggressive. This could be one reason it earned a Pulitzer. On a surface level, reading it from a purely superficial perspective, it feels almost whimsical. The narrator, a middle-aged man who has been collecting old and rare books since his college days, works as an editor for a publishing house in New York. The story is told entirely from his perspective: his recollections of his family's trials and tribulations, his observations of spinster sisters' odd behavior, his reluctance to spend much time around his parents and sisters since he left Memphis decades earlier. The book starts off light, returns sporadically to being very light, but an undertone of bitterness slowly creeps in.

The summons to Memphis he receives when the book begins is from his sisters. Their father, a retired wealthy attorney and relatively recent widower, has moved on to a fairly predictable stage. An octogenarian, their father had first allowed himself to be cossetted by the numerous widows in his age group. After a few months of going for tea, the old fellow moved on to frequenting nightclubs and apparently flirting with much, much younger women. He's now progressed to socializing with just one woman, a middle-aged matron he has actually proposed to. She's a respectable person not dramatically younger than him but still youthful enough for the sisters to recognize that the old man is a lot more likely to take a dirt nap before his intended bride than the bride is to predecease him. The assumption is that if he dies first, the widow gets everything. No surprise. The sisters want to prevent the wedding. The narrator recalls the classic Memphis fate of elderly widowers hoping to remarry: shuffled off to an old folks' home or moved to a family property so far out in the boonies they might as well be on a different planet. He wonders just what his sisters' plan for their father is.

And this is where the passive-aggressive behavior creeps in. The narrator's family turns out to be  good at saying they're doing something nice while actually making people's lives miserable. No one ever engages in direct communications, with the possible exception of the father. His personality is forceful enough that none of the children ever directly contradict or defy him, but it turns out they're really good at payback when they've got 30+ years of resentment built up.

Nothing dramatic happens, there is no grand denouement that ties everything up in a neat bundle. The book ends as quietly as it began with the narrator back in his New York apartment. Will he ever go to Memphis again? Probably not.

How would I rate this book on the usual 1 to 10 scale? It's in the middle of the pack. The writing is good, but the style was a little odd. I'd give it a 7. Maybe. Maybe only a 6. It's one of those damn with faint praise tomes. You know, "I've read worse." Would I recommend it to other readers? Only if they're as OCD as I am about reading (or at least attempting to read) all the Pulitzer Price fiction winners.

Next up on the list: Beloved by Toni Morrison. The L'Anse library actually has a copy on the shelves. Granted, it is the large print edition but at least it's there. No Interlibrary Loan for a change. And, given that this is another novel that gets described as "seminal," I'm hoping it turns out to be readable. Usually seminal is another way of saying "No one has read this book."
Posted by Nan at 12:00 PM