We have always been at war with Eastasia 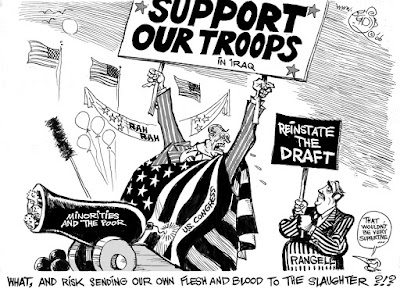 We really need to bring back the draft. Trump's recent photo op in Afghanistan, his 89 minutes at Bagram Airfield a couple days ago, reminded me why. Our misguided, impossible to win war in Afghanistan has now gone on longer than some kids graduating from high school in 2020 have been alive. There are troops serving in Afghanistan now who were in diapers when the "war" began.

Does anyone seriously believe we'd be embroiled in endless, impossible to win, never should have gotten involved in the first place conflicts if the draft still existed? Especially if the draft did not include student deferments? And was universal, like it is in Israel (translation: women must serve, too)? How many wars do you think we'd get sucked into if there was a strong possibility anyone's son or daughter might be required to don a uniform and go serve in some shithole where all the locals hate the United States?

Right now the U.S. effectively has an economic draft. When jobs are hard to find, low income men and women enlist in the military. With a few exceptions, the military gets the young people whose families could not afford to send them off to college. The cartoon above is old (Charlie Rangel retired several years ago), but it's still accurate. Everyone loves the troops and worships the military as long as their own kids aren't serving. How do we know the military is being filled with economic draftees? Well, among other things, every time the unemployment rate drops military recruiters have a harder time filling their quotas.

Given that one of the arguments made for enlisting is the education benefit, I have moments when I halfway wonder if one reason college has become so expensive is to force some young people into enlisting to avoid student loan debt. Which is a variation on the economic draft, but not quite as direct as enlist or starve.

I remember hearing Colin Powell speak back during the first Bush administration. General Powell thought the government should reinstitute an active draft for a number of reasons. One that he mentioned was the draft was a great equalizer. When you were dragged kicking and screaming into the military back in the 1950s and '60s, you found yourself surrounded by people who might be very different from you. Different classes, different ethnicities, wildly different backgrounds. It had a broadening effect on your world view. If nothing else, it reminded you the U.S. is a remarkably diverse country.

And, speaking of the country as a whole, the draft would be good for it. It is much healthier for a democracy to have a military that more or less mirrors the population as a whole. As things stand now, demographics for the military are steadily drifting away from the general population. We want a military that represents all of us, but that's becoming less and less true.

My personal preference would go beyond the military. I'd like to see universal service where everyone, male or female, could be called on to spend a set period of time doing something that was good for the country. Community service. Of course, not everyone would end up serving, but just knowing the possibility existed might get some young people to snap out of their typical self-centered bubbles for awhile.
Posted by Nan at 5:56 PM