An Exercise in Humility

Or, I used to think I knew how to sew.

As faithful readers (all two of you) know, I quilt. Over the years I’ve mentioned various quilting projects – machine pieced, machine appliqued, hand applique, whatever – made from typical quilting cotton, denim, and flannel. Projects have ranged in size from hot pads to king size. I thought I did a fairly decent job.

I’ve also mentioned more than once that after the S.O. and I invested in a motorhome we began volunteering as campground hosts. We’ve been hosts at both state and national parks, with my favorite being the first place we volunteered: Montauk State Park in Missouri. Montauk is possibly the most popular park in the state system and is well-known for its trout fishing. The Current River is born at Montauk where the waters from Montauk Spring and a small stream meet. I love Montauk. It’s a great park.

A couple months ago the two things – quilting and Montauk – collided. The Missouri DNR has a centennial quilt project in progress. A friend who is the current assistant park supervisor asked if I was still a quilter. I said yes. She then asked if I’d make a block for the park for the centennial quilt. Of course I said yes to that too. I quilt. So she sent me the requirements: using only 100 percent cotton fabric, create an 8-inch square block with a theme that represented the park. It could be pieced, appliqued, embroidered, or a photo transfer. In retrospect, the last listed would have been the smart thing to do – hindsight is always 20/20.

In any case, I said yes. No sweat. One 8-inch block? Piece of cake. No problem. All I had to do was come up with an appropriate theme. My first thought was to do something with the Montauk Mill. It’s a nifty historic structure, and it would likely be different from what the other fish parks would do (Missouri has four or five parks that highlight fishing – Roaring River, Bennett Spring, and a couple others that I can never remember). If you’re know for fishing, you’re going to do a fish quilt block. Or so I reasoned until I happened across a really nifty design for a paper pieced rainbow trout. Holy wah. It was a neat block. Granted, it was a design for a 10-inch block, but, hey, what’s a photo copier for if not to produce reduced copies. I’d reduce it down to 80% of original size and that would be that. 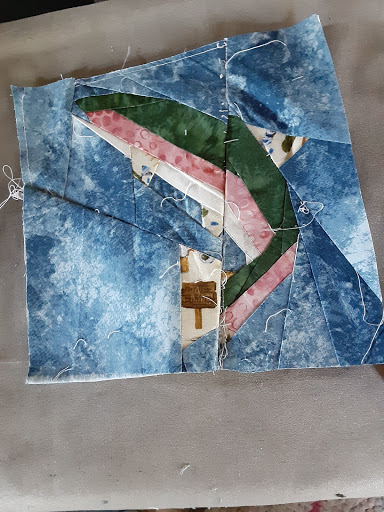 For the uninitiated, paper piecing is perfect for doing piecing that needs to line up perfectly. It helps ensure all your points are actually points, and is used a lot for doing hexagons (the classic Grandma’s Flower Garden pattern) because hexies are tricky to align neatly. Do a paper pieced trout and it would be like putting together a jigsaw puzzle with fabric. No misaligned pieces, no weirdness.
Point of information: that trout pattern has 41 pieces in an 8-inch block. Some of the pieces are less than 1/4 inch wide, which meant the part that was supposed to show was skinnier than the seam allowances for it. It was. . . interesting.


Three or four or possibly five rejected trout and several weeks of my life later, I threw in the towel. The trout kept coming out looking more like an oddly colored orca. Even worse, the beast was assembled in modules (A through G) and when it got to the point where the modules were sewn into the final two units, they refused to align. According to the pattern, all the seams were perfect. According to the deformed not-exactly-square disaster on the ironing board, the block was a hot mess. 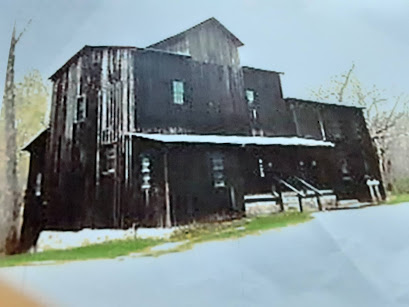 On to the original thought, the Montauk mill. Nothing but nice straight lines, no curves like a trout rising has, so the pieces would be nothing but rectangles and triangles (the building has gable roofs). All I needed was a decent photo of the mill to use as a guide. Got the photo, created a pattern, did paper piecing again, and managed after another several days of my life and three botched preliminary attempts to produce something that wasn’t a total embarrassment. Only 13 pieces instead of 41, although that first floor roof was also super thin and a a total pain to get looking even remotely like a roof.

Made the mistake of trying to embroider Montauk in cursive above the mill, which is when I learned my embroidery skills (which used to be amazing) have definitely weakened with age. It was supposed to curve around and end in a fish hook. Now it just looks like someone misspelled Montauk. Still, despite my qualms about the embroidery, the block got shoved into an envelope and is now probably jammed in a USPS automated sorting machine somewhere multiple states away from here. Never again. 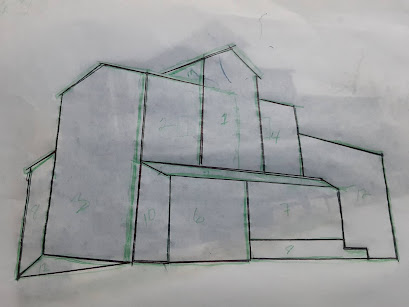 Maybe. Although the moral of the story appears to be Never Volunteer (or maybe never over-estimate your own ability to do stuff), I am going to try again with the trout, except this time I’m scaling the bastard UP, not down. I invested a fair amount of actual money in fat quarters specifically to build the trout. It wasn’t easy finding a good pink to use for the stripe down the side, and it will go into a fish worth keeping. I’ve got a Rolling Stone quilt in progress that’s going to include some miscellaneous blocks commemorating our travels with the late, lamented Guppy, and the fish will go into it, as will one of the prototype blocks for the mill. 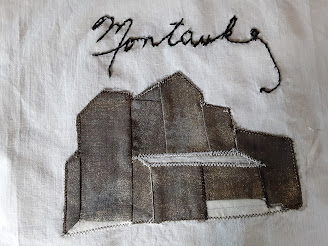 The S.O., incidentally, came close to suffering bodily injury when he looked at the Mill block and said “what about the windows?” After struggling to align pieces the size of fingernails for the building, there was no way in hell I was going to screw it up by trying to embroider windows. The silhouette is right; people can use their imaginations to put in the windows and the handrails for the steps. I'm trying to take comfort in the fact that when it's set in a quilt with a gazillion other blocks and then quilted it's not going to look as crude as it does when seen in isolation. I'm in a bunch of quilting groups on Facebook; I've seen lots of stuff that looks worse but people still manage to brag about instead of cringing.
Posted by Nan at 8:09 AM