Republicans did it to themselves 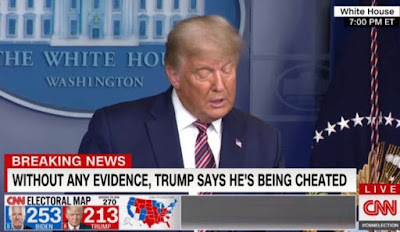 The S.O. and I were watching "Real Time" last night. It had been quite a few months since we'd seen either Maher or the show, but I was curious. Maher has a knack for annoying the hell out of me.* I was, however, curious to hear what he had to say about The Donald being stuck in the denial stage of grief.

Turned out his interview guest was a youngish woman, a blonde (of course) and a lawyer who works for the Trump campaign. She was like a human parrot. She had one talking point nailed down and did not want to let go of it: legal votes. Only the legal votes matter. And of course the Trump campaign is going to be vindicated in court. Maher kept pointing out they'd lost every challenge they'd made, had basically been laughed at or reprimanded by judges, but she was like a broken record. I really hope she's gotten paid (Trump is notorious for stiffing the help) because she earned her rubles. She was unshakeable. Legal votes, got to count all the legal votes.

Bad news for Trump, of course. So far the number of "illegal" votes found, the apparently incredibly rare  invalid ballots, can be basically counted on one hand. In Pennsylvania the Trump team had hyperventilated about a postal worker saying that the postmarks on some absentee ballots had been altered to make them look like they'd been postmarked by November 3. When investigators  spoke with the man he admitted he lied, and in any event the incident would have affected two ballots. You got it. Two. As in "one, two, buckle my shoe." Biden carried the state by something like 50,000 votes. Even if those two ballots had been tossed out, I don't think he was in any danger of losing the state.

In Nevada the Republicans produced a list of people who were not physically living in the state but voted absentee. The Trumpers screamed fraud. Turned out the list was mostly members of the military whose permanent residence is in Nevada but who are currently stationed elsewhere. So basically Trump's minions were attempting to nullify votes cast by members of the armed services. Kind of an interesting way to thank men and women for their service -- cancel their votes -- but not surprising given the heavy whiff of desperation reeking out of the White House at the moment.

In Georgia the Republicans tried to claim dead people had voted and provided an example of a man who died a number of years ago. Turned out that once again they were sloppy in their research. The person who voted was the man's widow, a lady in her 90s who is sufficiently old fashioned that she is registered to vote as "Mrs. James. . ." That's what on her ID, and it's how she signed her ballot because the law is clear that the signatures need to match. An interesting side note was the video clip: this elderly white woman made it clear that she didn't vote for Biden; she voted against "the other one." Apparently even some elderly white Southerners have relegated Trump into the category of he-who-must-not-be-named. 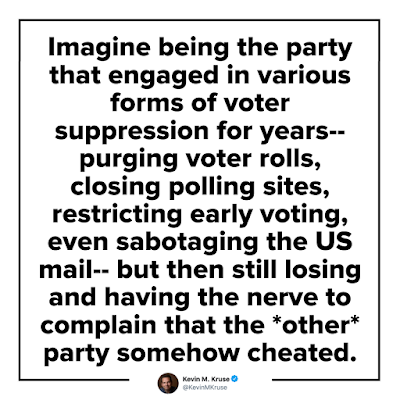 I could go on, but as usual I've done a long intro to a slightly different subject. Totally predictable consequences. Beginning quite awhile ago, the Republicans started beating the drum about voter fraud and people voting who weren't legally eligible to vote: noncitizens mostly. They pushed hard to get voter ID laws passed, and, along with the ID requirements, started making it as difficult as possible to get the paperwork required to get an acceptable ID card.

When this first began happening, various outraged activists made a lot of noise protesting the suppression tactics. They complained loud and long. They pursued litigation. Eventually, however, some commonsense penetrated. They continued to talk loud and long about voter suppression, but they figured out that if they wanted everyone to be able to vote they had to work inside the rules. So they began helping potential voters navigate the system, get the ID they needed, and get registered to vote. They organized shuttle services to get people to the polls on election day, they went door to door working on educating people about how the system worked. A couple years ago, Brian Kemp was able to manipulate the results of the Georgia governor's election by doing a purge of the voter rolls. This year activists were proactive -- they made sure potential voters would be safe from a repeat purge. I saw enough reminders on social media that I know similar efforts were happening nationwide.

End result? The Republican party spent 20 years working on making it difficult for people to vote. They made it  close to impossible for anyone who was not a legal voter (e.g., not a citizen) to cast a ballot. Their assumption, obviously, was they'd eliminate the riff raff and only the right type of voter would vote, i.e, white people.

This year their efforts to guarantee the voting system was secure came back to bite them. Having put a ton of roadblocks in the way -- picture IDs at the polls, only certain types of IDs accepted, really tight inspection of absentee ballots, etc. -- they wound up with an election where voters were prepared with the right type of IDs, complied with the rules for registering to vote, and had made sure they did everything required for either submitting an absentee ballot or voting in person. End result? An election that an obscure office within the Department of Homeland Security (Election Infrastructure Government Coordinating Council ) has declared was the cleanest, least problematic election in U.S. history. No fraud, no hacking, no weirdness. Republicans wanted a secure, safe election system. They got one. Good work, dudes. Too bad the populace didn't vote the way you wanted them to.

*Last night was no exception. I did spend a fair amount of energy yelling at the television and calling Maher an idiot for his buy-in on the corporatist/centrist line that Americans won't vote for progressives.