Waco Mammoth National Monument is one of the newer additions to the National Parks system. Obama signed the enabling legislation in 2016. I'm reasonably sure he wasn't too thrilled about it. Waco Mammoth is an interesting park but would it have risen to the level of national park status without some pressure from Texas Congress critters? I doubt it.

I'm going to be honest. If Waco Mammoth is of national significance, so are Ashfall Fossils State Park in Nebraska and Mastodon State Historic Site in Missouri (and no doubt a plethora of other local and state parks and historic sites across the country). In fact, from what I've seen and read both of those parks are more significant in terms of species diversity and regional history. Ashfall preserves what can only be described as a shitload of mammal fossils, the whole range of animals wandering the Great Plains during the Ice Age. I haven't been there (yet), but the descriptions are pretty amazing. Mastodon also has variety, although the major focus is on mastodons because that was the most dramatic find. Mastodon also has human history --  mastodon and other bones date from a fairly recent time period, a mere 11,000 or so years ago, so the site includes evidence of human hunting activity.

So what does Waco have? Mammoths. Lots of mammoths, granted, but that's basically it. A nursery herd of mammoths, one lonely camel, one as yet unidentified mammal, and a fragment of a young saber tooth tiger's tooth. Not that the nursery herd is actually on site. Researchers from Baylor University excavated sixteen female and juvenile Columbian mammoths about 40 years ago. The bones are now in storage. What is under the roof of the dig shelter are bones from several mammoths found in the process of preparing to backfill the original dig, including a humongous male who apparently died 30 or 40,000 years after the nursery herd got wiped out. 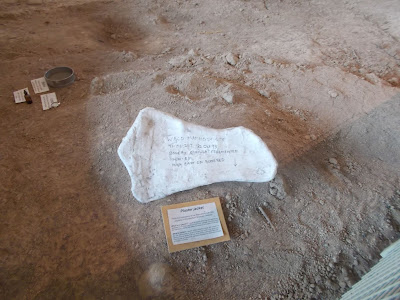 It is an interesting exhibit, and I have no doubt it is an important site in terms of paleontology. According to the interpretive ranger, the nursery herd is the only one ever found. What exactly killed sixteen mammoths simultaneously -- flash flood? mud slide? -- isn't known, but it certainly gave paleontologists a lot of material to work with. The fact more bones were found of animals that died thousands of years later suggests this particular location may have been periodically rather treacherous, which in turn suggests that if the dig is continued more bones will surface. A paleontologist has been added to the NPS staff so excavations will continue at the usual snail's pace -- trowels, small brushes, and lots and lots of patience make a dig in progress an excruciatingly boring process to observe -- and more good stuff may be found.

Waco Mammoth is, incidentally, one of those places that illustrates why when a member of the public approaches an expert and says "I don't know what this is but it might be important" it pays to look at the mystery object. The original discovery was made by two male teenagers hunting for arrowheads along the bank of a creek that feeds into the Brazos River. They spotted an unusually large bone sticking out of the dirt, knew it wasn't from a cow, and took it to Baylor. The university set up a dig. Sixteen mammoths later they thought they were done. They were also running out of storage space.
When the backfill revealed yet another dead mammoth, they decided to preserve it in situ, first with a temporary tent and then with a permanent structure. The land's owner donated the property to the city of Waco, a nonprofit foundation leapt into action, millions were raised to construct the permanent dig shelter, and the rest is history. The park has sufficient acreage to allow for short hikes, for picnicking, and for the ever popular dog-walking. Some of the most popular (going by the head counts of visitors) parks have high visitation not because the park is intrinsically interesting but because it exists on the edge of a suburb where good places to walk Fido are scarce -- I think there were more dogs at Kennesaw Mountain National Battlefield the day we were there than there were humans. But I'm wandering off topic, as usual. Waco Mammoth is a nice little park. Plenty of parking, even for RVs, friendly and knowledgeable staff, and interesting enough that stopping there didn't feel like a waste of time.
Posted by Nan at 5:00 PM

Email ThisBlogThis!Share to TwitterShare to FacebookShare to Pinterest
Labels: all the world's a stage, National Parks, politics