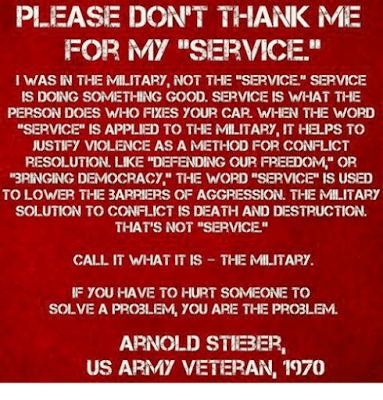 I probably managed to annoy a few people on Facebook this morning. A friend shared a meme that asks the reader how often they thank veterans for their service. My answer? Never.

"Thank you for your service" has to be the most annoying phrase since "Have a nice day." I am a veteran (Vietnam era) and it irritates the hell out of me. It's totally vacuous, a mental sneeze. I'm guessing maybe one in a thousand people actually mean it, if that, but everyone spews it. What exactly are you thanking people for? I was a medical records clerk. Are you grateful I mastered the alphabet and was willing to risk paper cuts? Or do the thanks only apply to combat vets willing to shoot peasants in shit hole countries?

Do you seriously believe that people who served during the Vietnam conflict (one of the many wars the U.S. has managed to lose in the past 60 years) prevented the Viet Cong from invading Santa Monica or Big Sur? Over 47,000 U.S. troops died in Vietnam and for what? I'm reminded every time I shop for clothes that the Vietnamese won that one*; I have no doubt that if the U.S. ever admits all we're doing in other parts of the world is supporting companies like Boeing and Lockheed and stops shooting and/or bombing people unlucky enough to be Muslim that we'll start seeing cheap shit labeled "Made in Afghanistan" or "Made in Somalia" on the shelves at Dollar General. The Chinese are already moving sweat shops out of China into poverty-stricken regions in Africa. For that matter, Ivanka Trump had (probably still has) a shoe factory in Ethiopia, a country where the U.S. has targeted terrorist organizations like al-Shabaab. The First Daughter didn't even wait for the conflicts to end before going in search of people desperate for work.

Bottom line: Want to thank a veteran for their "service," which, as the accompanying meme makes clear isn't service at all but an endorsement of endless war? Then do something concrete. Lobby your congress critters to improve funding to the Veterans Administration. Volunteer at veterans' care facilities. Thank people through deeds not platitudes. And never ever vote Republican.

*Whenever I notice the Made in Vietnam label on heavy winter jackets or other cold weather gear, I wonder what the workers sweating in Vietnam's heat and humidity think of the parkas they're attaching fake fur to.
Posted by Nan at 3:04 PM

Email ThisBlogThis!Share to TwitterShare to FacebookShare to Pinterest
Labels: life in general