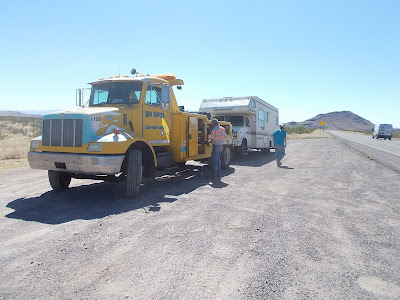 The Guppy is gone. We left the beast parked in a storage lot in Arizona in mid-May along with instructions to The Younger Daughter to try selling it. We weren’t particularly optimistic about it going anywhere. After all, her instructions included being totally honest about its various mechanical flaws: the problem with the gas line, for example, and the fact it had a mystery relay problem that the S.O. was reasonably sure he’d finally solved but was burnt out on dealing with. Then when you add in the metal pan sitting under the engine with transmission fluid dripping into it. . . We were more or less resigned to seeing the Guppy again in November.
It took the YD a few weeks to get to a point where she knew for sure she’d be around to deal with potential buyers – she’s an archeologist so does have to get out in the field on a regular basis – but she did get it listed last month. Her phone immediately blew up with messages. Apparently ancient RVs of marginal reliability are in greater demand than one would think. She posted the ad on a Monday; by Friday afternoon the Guppy was gone, heading down the highway to its new home.
The Guppy went for a proposed use that was more or less exactly what I thought would happen. Cheap local housing. The young woman who bought it was a single mom with small children; they were part of a multiple generation household. She was living in her grandfather’s house. The Guppy was going to get parked in her grandfather’s yard; he said he could easily connect the sewer and water to his own. For a relatively small amount of money, they acquired a two bedroom, one bath addition to his house. The young woman was enthusiastic about getting a room of her own. The kids would get the dinette bed and the bunk over the cab. Grandad was not thrilled with the fact the air conditioning was dead on the Guppy, but you know the old dude was going to remedy that pretty quickly. Paying for a cheap a/c unit to keep the granddaughter comfortable would be a small price to pay for getting her kids out of his house.
It was actually the perfect solution. We would have felt a tad guilty if anyone bought it planning to actually travel with it, but for affordable housing? I have no doubt that when the time comes that the woman no longer wants the Guppy, she’ll be able to resell it to someone else locally for a similar purpose.
It does feel a bit odd to know that it’s gone. The S.O.  and I experienced a strange mix of relief and regret when we got the news. It sold for less than our asking price but more than the amount we had decided we had to get so I guess we’re happy. I know the S.O. is not going to miss having to work on the Guppy’s engine. Thanks to the design and the way everything was crammed under the hood, it was never fun. Lots of inaccessible parts. You shouldn’t have to put a vehicle up on a jack stand and remove a wheel just to change spark plugs, for example.
As for why we decided to jettison the Guppy. . . the bottom line was it had gotten to the point where we couldn’t relax in it. I knew the S.O. would have eventually gotten the mystery problem solved, but we also knew that even if he did solve it, we’d always be expecting something equally weird to happen. There’s only so many times you can sit by the side of the highway waiting for a tow truck before you have to admit the beast should have been painted bright yellow. It wasn’t a fish. It was a citrus fruit.
On a side note, when we decided we’d try selling it, we rented a U-Haul truck to get our stuff home. We had an amazing amount of shit crammed into not many square feet. Stuff really does expand to fill whatever space is available.
Posted by Nan at 11:25 AM

Email ThisBlogThis!Share to TwitterShare to FacebookShare to Pinterest
Labels: adventures with the Guppy, life in general