Improvements at the ranch 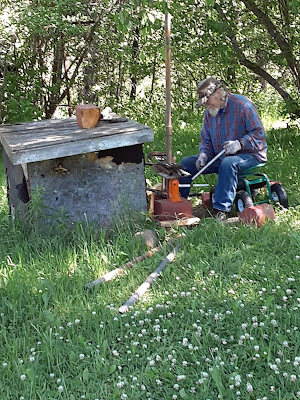 I may be able to water the garden this summer. The S.O. succeeded in pulling the old point for our shallow well. In the photo he has succeeded in jacking the pipe up to where he's been able to remove two 5-foot sections and is close to having another section almost high enough to remove.

The well is close to the Woman Cave and provided our drinking water back when we had a mobile home. It's also one of those wells that the Health Department freaks out over -- not particularly deep so could be prone to contamination. Never viewed it as an issue for us, though, not when we're perched close to the highest point around here and are sitting on glacial till.

Even better, that glacial till was beachfront a few thousand years ago. What is now wetland on the lower half of our property is the remnant of a pothole lake formed when the glaciers retreated. Over millennia a whole lot of water soaked into the gravel under us. Our place has never lacked for water. The problem has been getting it out of the ground. Glacial till tends to have a lot of sand in it. Sand has a nasty habit of clogging the screens on well points as well as shredding the working parts of pumps.

Which is what happened to the most recent well a couple years ago. The sand content in the water that made it through the pump seemed to get worse until it was more like the pump was sucking mud -- the last load of laundry done using that well water had so much sand in it for all intents it wasn't clean at all. We brilliantly figured out it was time to pull the point, clean the sand out or replace it, and hope the problem was solved for awhile.

Except the point did not want to come out of the ground. The well consisted of (as far as the S.O. could recall) four 5-foot lengths of drive pipe and the 3-foot point. One of the couplings on the pipe must have gotten wedged under a rock because it would come up maybe 6 inches and stop. He tried multiple times a couple summers ago, even had help in the attempt, and the pipe would not move. We did talk about simply buying more pipe and driving a point in a few inches away from where the old pipe was sticking out of the ground, but we'd already done that once. The sand has been an ongoing issue for decades. When we put the new point in this time it's going to be, as best I can recall, the fourth one since 1973. 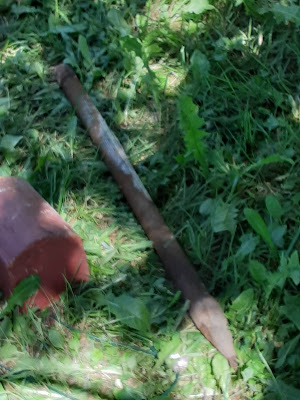 The original well on the property was a dug well, really shallow, farther down the hill and close to the sauna. It hadn't been used in years so when the S.O. and I set up housekeeping in the Shoebox in 1973 he decided to do a new well a few feet away from the old dug well. He excavated a hole so the pumphouse would be basically underground and protected from freezing in the winter, and then drove a point. I think that one went down maybe 15 feet. Only problem was that in the spring, the pumphouse tended to fill with water as the snow around it melted. So then he drove another point farther up the hill and built an above-ground pumphouse. That point worked fine for a few years, had amazing water pressure, and then things began slowing to a trickle.

We brilliantly figured out the screen on the point was getting blocked. We tried a couple remedies, he tried pulling it with no luck, and then he drove Point Number 3. Which worked fine for a few years. . . and here we are getting ready to finish pushing Point Number 4 into the ground. At least this time it's a little easier getting the point back in -- he's just shoving it into the hole the Point Number 3 came out of. It had about two feet left to go when he quit for the day. Once it's down far enough to reconnect the pump, all  we have to do is hope the old pump still works after having humongous amounts of sand pass through it for a decade or two.

Photo is of the point following its removal. It had a long split down one side and was packed two-thirds full of sand. Not much of a mystery any more just why it was pumping mud.

I didn't bother with a garden last year because I figured out a long time ago I can not count on rain keeping things growing. This year, of course, when I will be able to run a sprinkler it'll turn out to be the wettest summer in 50 years.

This well also supplies water to the guest cabin so if all goes the way it should, the next guest in the cabin will have cold water on tap again.