The question is do we really want to go through Rockford, Illinois, again? Rockford itself isn't bad since there seems to be a lull this year in the endless construction projects, although the toll way is now kind of mysterious if a person doesn't have an EZ Pass (and we don't; why would we?). When we went down in April there no longer seemed to be an actual cash money lane for folks who are just passing through and don't plan to ever get on an other toll road in Illinois. 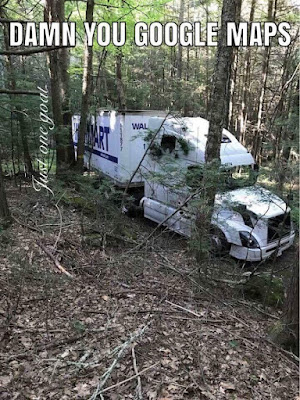 But I can live with mysterious toll ways. I had actually been exploring alternatives to I-39 for awhile because there's a stretch of highway just south of Rockford that is remarkably rough -- it made the Guppy bounce around so much back in 2020 that the stove almost got jolted on to the floor, and it hadn't improved much when we went over it a few months ago. So, blue highways instead of Interstate.

Google maps came up with one that involves zigging a bit west south of Madison, Wisconsin, and then doing some zigging east and then zigging west, all while more or less aiming south toward Bloomington/Normal while paralleling the Interstate. It didn't seem to make much difference in total miles, but I am of course dubious. The real trick is coming up with a route that will allow us to make reasonable stops, even if it's just in Walmart parking lots, because days have gotten shorter and it will be Real Winter by the time Magee is loaded and hitting the road. And we're old.

Another alternative would be to skip Illinois and eastern Missouri completely. Just angle over to Minnesota or Iowa, go west until we hit I-35, and follow that down to where we could get on to I-49 and then aim for Hot Springs from the Fort Smith side of Arkansas. Maybe. A lot really will depend on the weather. The more miserable it is, the more likely we are to stick with a route we've traveled before.

Email ThisBlogThis!Share to TwitterShare to FacebookShare to Pinterest
Labels: life in general, on the road