WTF is wrong with some people? 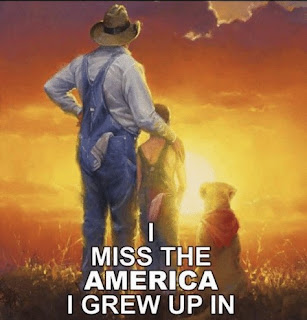 Every so often this meme makes the rounds on Facebook. It's usually shared by people waxing nostalgic for the days when everyone's childhoods resembled Beaver Cleaver's or Opie Taylor's, at least in their minds. Not surprisingly, it usually gets labeled as the classic white racist boomer fantasy. You know, the elderly white guy's favorite "memory" -- the good old days when everyone's dad was a genial but strict clean cut dude in a suit, and women knew their place as well as doing all the cooking, cleaning, and catering to their men while dressed in neatly pressed cotton dresses,heels, and a tasteful string of pearls. It goes without saying all the neighbors were white.
My response to the meme is usually to state I don't miss the good old days at all. I'm old enough that I remember polio, being quarantined for measles, and, when I was older, the gender stereotyping that steered girls into home economics and bookkeeping classes while boys got to take shop or advanced science and math.Why couldn't girls take shop? Because then the boys wouldn't be able to tell dirty jokes or use vulgar language. Shop was where boys could be boys; home ec was where the Future Homemakers learned how to set the table for a formal multi-course meal, right down to the fish forks.
Are fish forks still a thing? Did anyone ever actually use them outside dinners served by English aristocracy? Then again, on a less pretentious scale, exactly what is the point of having separate forks for the salad and the main dish? As far as I can discern, the main purpose of having a plethora of silverware on the table, all the various spoons and forks and knives, is to signal that you're doing well enough financially that you (or, more likely, your minions) can lay out an array of metal that will baffle any peasants present at your banquet.
But, as I was starting to say, it hit me this week that I actually do miss the America I grew up in. I miss the days before the Internet and social media, the days back when stupid people were unable to form echo chambers where they can parrot each other's delusions. You know, the days when if someone was an asshole the only people who had to hear that person being an ass were people who actually knew him. The days when people might have been mean and petty but their meanness and pettiness didn't affect anyone other than the poor saps who were stuck with them through marriage or work. The truly dumb fucks did the bulk of their pontificating through letters to the editor of the local paper. The L'Anse Sentinel used to have a couple regulars who could be counted on to fill page space with their tinfoil hat theories. (For all I know, they still do. I rarely read the Sentinel.) Those people were generally mocked by the community as a whole. They functioned as a source of amusement and not as a symptom of an increasingly dysfunctional culture.
Now, of course, the tinfoil hat types clog up the Intertubes. They band together in cyberspace and encourage each other's lunacy. Worse, after encouraging each other online, they engage in behavior that not long ago would have been unthinkable. Crazy people living in Florida can inspire equally crazy people living in Idaho or Vermont to engage in aberrant antisocial behavior like issuing death threats against politicians or policy makers they disagree with. Harassing the families (including young children) of school board members or public health officials is a recent example. My news feed lately has had way too many stories about the hell school board members are being put through over stuff that shouldn't be issues at all: trying to prevent the spread of infectious disease, for example. There are depressingly large numbers of people deciding to not run for school board again once their terms expire because it's not worth the stress.
Or worse. One of the most disheartening stories recently was about the harassment directed at the school board chair in Hastings, Minnesota. The woman and her family experienced so much vitriol, including credible death threats, that she and her family had to move. And what inspired all the hate? She was the chair of a school board that had voted to require masks for in-school students as part of the school district's response to the COVID pandemic. (Other recent examples of nutjobs harassing school boards include freakouts over library books with adult content -- as if high school students had never heard an obscenity or knew what sexual intercourse is -- or demanding schools eliminate Critical Race Theory from the curriculum when CRT isn't there in the first place. The stupid, it burns.)
I keep thinking there are all sorts of things that in the past people might think but they'd never say out loud. Now they don't just say the crazy shit out loud, they rally others to be equally delusional or nihilistic. Social norms have become meaningless to them. You used to have to be drunk or certifiably crazy to yell obscenities at a school board or city council meeting, and for sure you had to be not in your right mind to phone death threats to a neighbor. Not anymore. Now you can do and say whatever horrible thing pops into your head and not only will you not pay a price for it, you'll have fellow amoral, cognitively challenged asshats forming a cheering section.
Posted by Nan at 12:55 PM

Email ThisBlogThis!Share to TwitterShare to FacebookShare to Pinterest
Labels: never underestimate the power of stupid people in large groups