I wonder why they might have trouble filling this position?

If the following is an example of the typical Help Wanted ad, I don't think there's much of a mystery as to why the applicant pool might be thin even in an area with traditionally high unemployment rates. This is a part-time job that's going to require a bitch of a commute once it gets to be winter. Granted, it's only 10 miles from downtown L'Anse out to the Forestry Center and US-41 is real highway, but even so. . . if the shift starts at 6:30 a.m., it means being on the road before the snowplows go out. The position is less than full-time, and by today's standards the pay kind of sucks for a job that is dirty and physically demanding. 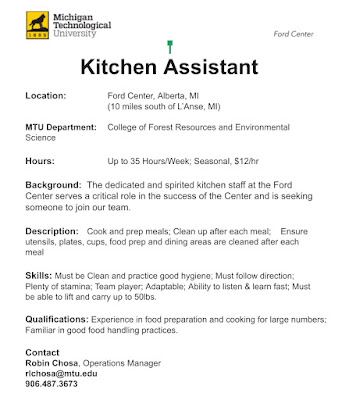 Granted, there are people working locally who do longer commutes -- I know people who drive from Republic or Houghton to work in L'Anse -- but they're not washing dishes part-time at a job where the hours and intensity of work can vary widely from week to week.

On the other hand, if a person is willing to work in a kitchen, working for Tech would surely beat working in one of the local restaurants. Among other things, Tech won't try to stiff you on your hours by asking you to work off the clock or to ignore health code violations. There are definitely worse jobs to be found locally.

Email ThisBlogThis!Share to TwitterShare to FacebookShare to Pinterest
Labels: life in general, the job market