So what's new at the museum, you ask?

Well, no one is actually asking but I'm answering anyway.

We're living in exciting times. I was finally able to erase one of the "action items" off the list on the white board in the office. Number one for the past several years has been "flagpole." A few seasons back one of the flag clips broke. We bought new clips and then discovered the method of fastening the clips to the lanyard was a tad fucked up. The lanyard is a metal cable; the clips were clumsily safety wired in place. I brilliantly figured out there had to be a better way of doing stuff.

At about the same time, it struck me that the flagpole didn't look real good. The dominant color for the metal pipe was rust. So the museum manager made an executive decision that we wouldn't settle for just safety wiring a new clip in place: we would paint the pole and replace at least one of the pulleys that was twisted in an odd way. Flagpole went on to the action items list. Time marched on.

At some point we noticed a strange object on the ground near the flagpole. The wind (which down in Baraga blows more or less constantly) had managed to dislodge the finial from the top of the pole. After first doing a 'holy wah, what a clever hack' when it sank in just what the finial had been, new finial got added to the flagpole's refurbishment supply list. I toyed briefly with going looking for a new copper toilet tank float, but then remembered the eagle in the storage building. If the wind had managed to dislodge the original tank float finial, sooner or later it would blow an equally lightweight replacement off the pole. Granted, the original hung in there for over 20 years, but still . . . The eagle, which appeared to be solid cast iron, was definitely not lightweight. If there is ever a wind strong enough to blow that eagle off, it will mean the museum is probably gone, too. 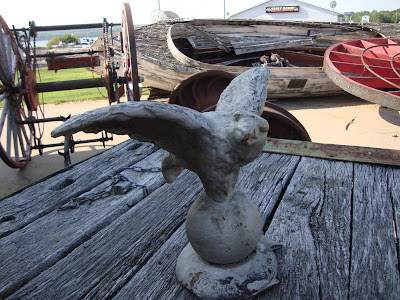 Where the cast iron eagle came from to begin with is another one of those unknown provenance cases that the museum is rife with.We have absolutely no clue where the thing originated. The bird weighed a ton (well, at least 10 pounds, possibly 20), had peeling gray paint, and was mounted on a broken cast iron base. After I remembered the bird existed the S.O. removed the base, figured out what size pipe was needed to fit neatly inside the flagpole, and then tack welded the eagle to an appropriately sized 3-inch nipple. (And exactly why are short chunks of threaded pipe referred to as nipples? It's a gendered part because both ends are threaded as male, so why is it a nipple? Why isn't it a dick?) The eagle turned out to be perfectly proportioned for perching on the pole:not too big, not too small.

Long before we figured out the eagle would be the perfect finial, I started spritzing penetrating oil on the nuts on the bolts on the base for the flagpole on a regular basis. That can of penetrating oil lasted a remarkably long time, through at least three summers, and it's not empty yet. I figured penetrating oil was a good idea because the bolts, nuts, and washers had had a couple decades to rust solid in. Turned out it wasn't that bad. When the time finally came to remove the bolts, the nuts came loose without much effort.

The flagpole is set up in what is probably the classic fashion: two very solid supporting metal posts on either side of the metal flag pole; a couple of long bolts going through all three. If we pulled the bottom bolt, the pole would pivot and we would paint it and fix the lanyard pulleys. The trick was just going to be lining up some muscle to pivot the pole: it's got to be twenty feet long, maybe longer, and is an iron pipe about 3 inches in diameter. It has, to say the least, a fair amount of mass.

We got the muscle in July. That's when we discovered that whoever set up that flagpole was determined it wouldn't go anywhere. In addition to the two very obvious bolts, it turned out there was a third one at ground level that didn't show until we got the middle bolt out and nothing was happening. I tend to view that as overkill but it's also typical of the museum: the things that don't matter were over-engineered; the ones that count are half-ass or worse. (One of these days I'll do a rant about the wiring: the open junction boxes, switches that don't control anything, and the ceiling fans that can only be controlled by turning a circuit breaker on or off.) 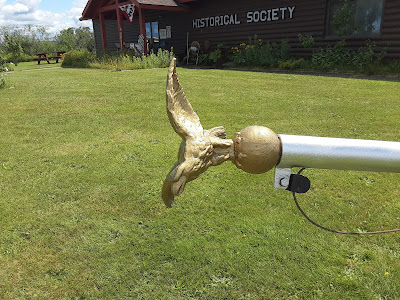 So now the flagpole is back in position, We painted the pole silver and jazzed up the eagle with gold so the pole is looking good. We can start flying an American flag again and hope that the spotlight on the side of the building really does illuminate the flag after the sun goes down.. The only question left is just how long the current flag will last. The same wind that rips toilet tank floats off the top of flag poles does a remarkably efficient job of shredding fabric.

Email ThisBlogThis!Share to TwitterShare to FacebookShare to Pinterest
Labels: adventures in maintenance, museum, questions you didn't know you wanted to ask